Bristol Rugby signed off their title-winning campaign with a thumping nine-try victory over a plucky Hartpury at Gillman’s Ground on Saturday afternoon.

First-half tries from Andy Uren, Ryan Edwards – who would go on to score a brace – and Soane Tonga’uiha gave Pat Lam’s side a narrow lead at the break, after three Hartpury tries in ten minutes - two from Dan Murphy and one for former Bristol captain, Iain Grieve - had threatened to derail the champions’ charge.

Edwards grabbed his second early in the second half, before Jordan Williams scored his first and Bristol’s fifth. And after Bristol-bound Harry Randall had pulled another back for Hartpury, Jordan Crane latched on to Williams’ offload to go over, before the full-back’s second took the visitors to a 25-point lead.

And with time ticking away, replacement Rhodri Williams’ quick-fire brace completed an emphatic Bristol win and sealed a 100 percent away record in the GKIPA Championship.

With nothing on the line for either side, this end of season finale began in fluent style, with Bristol taking the early ascendency. And it was the visitors who took the lead as early as the fifth minute when Andy Uren collected Nick Fenton-Wells’ subtle offload to touch down, with Sheedy converting.

The hosts hit back on 19 minutes when Iain Grieve applied the finishing touches to a well-worked driving maul. Williams’ conversion drifted wide but the Hartpury fly-half made no mistake three minutes later after prop Dan Murphy had fought his way to the whitewash from close range.

Hartpury were enjoying an extended period of territory and possession and crossed for their third try in ten minutes when Murphy rumbled over in identical style to his first.

Seven minutes before the break, Bristol sprung back into life when Callum Sheedy’s vision and execution saw the fly-half pick out Ryan Edwards with a pinpoint cross-field kick to score the visitors’ second, with Sheedy again converting.

With the clock in the red at the end of the first half, James Williams looked to send Hartpury into the break with a six-point lead, but his drop-goal was charged down by Andy Uren who was hauled down metres short of the line. The hosts scrambled and soon infringed at the breakdown, before Soane Tonga’uiha held off two defenders to score Bristol’s third, with Sheedy’s conversion opening up a four-point lead at the interval.

That soon became 11 points when Sheedy and Sam Graham combined to send Ryan Edwards in for his second and Bristol’s fourth, with the winger applying a pacey finish in the corner and Sheedy adding the extras.

The fifth arrived minutes later, when the two Jordans – Crane and Williams – combined to send the Welsh full-back in the under the posts, as Pat Lam’s men opened up an 18-point lead.

But back came Hartpury, and in a game where a number of former Bristol players were lining up in a Hartpury shirt, it was a future Bristol player who scored the hosts’ fourth try, as Harry Randall rounded off a dazzling break from Maliq Holden to score on the left-hand side. Replacement Sam Leeming converted.

Scrum-half Andy Uren enjoyed an impressive afternoon in Gloucestershire, and the Academy youngster was at the heart of Bristol’s seventh try, teaming up with Billy Searle to send captain Jordan Crane over.

Jordan Williams dazzled a crowd of more than 3,000 with an electrifying step and turn of pace for Bristol’s eighth seven minutes from time.

And shortly after coming on as a replacement, Rhodri Williams signed off his stint in a Bristol Rugby shirt with a quick-fire double late on – the first a trademark snipe from the base and the second an opportunist interception.

David Lemi lined up the final conversion, in his last act as a Bristol Rugby player, but the kick drifted agonisingly wide as the visitors capped a title-winning season with a resounding away win.

After Andy Uren's fifth-minute try had given Bristol the lead, three Hartpury tries in ten minutes flipped the game on its head. But after Andy Uren had charged down James Williams' attempted drop-goal, Soane Tonga'uiha crashed over to give Pat Lam's side a four-point lead at half-time - a lead they would only build on after the break.

Man of the match: Jordan Crane

The captain has been sensational this season, and Crane signed off the season with another influential display in the number eight shirt.

Leading from the front, it was Crane's deft offload that sent Jordan Williams in for his first - and the skipper soon got over the whitewash himself, after neat work from Billy Searle and Andy Uren.

A classy operator, Crane was the standout man once again at Gillman's Ground. 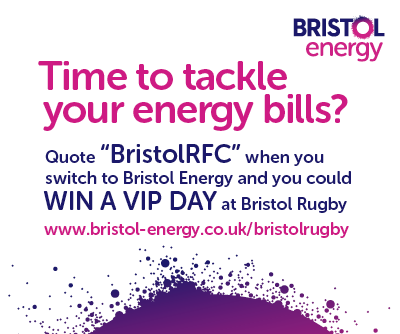